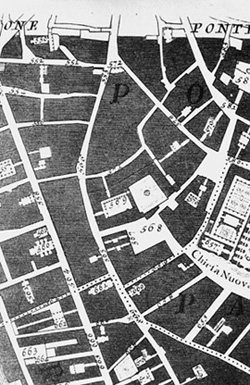 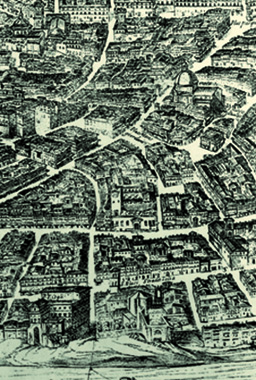 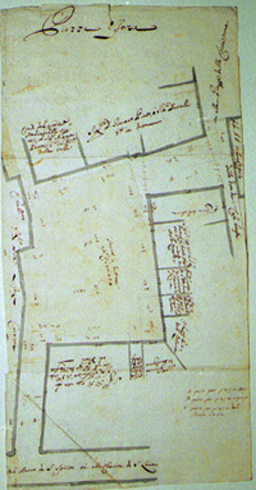 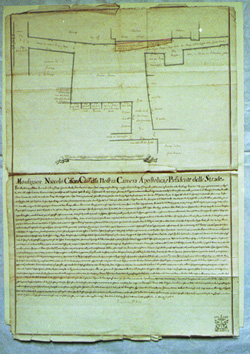 Palazzo Sforza Cesarini was built by Cardinal Rodrigo Borgia, most likely on the structure of a preexisting edifice that very probably was used as the Pontifical Mint.

This can be deduced from two original documents of the period; the first one is a Papal Bull dated February 23 1458 which regards the sale to Cardinal Borgia of the Mint Palace , located in “Via dicitur Recta” (adjective used for different streets) near the Chiesa di San Biagio della Pagnotta. The record specifies that the palace held the “Public Mint” on behalf of the Apostolic Chamber.

In the Commentaries written by Pio II approximately in 1462, the Palace is mentioned in the context of the description of the procession that took place in Rome to commemorate  the arrival of San Andrea’s head. This text also quotes  the Palace as the seat  of the Mint and describes it ornamented with tapestry and embellished with art objects for the occasion.

Rodrigo Borgia dwelt  in the Palace as Vice-Chancellor of the Church, role that was conferred to him in 1457 by Pope Callisto III of whom Rodrigo was the nephew. Since then, the Palace was commonly named  “Palazzo della Cancelleria”, appellation that is found in many antique descriptions of the building. In approximately 1465, Gaspare de Verona talks about the Palace as a completed edifice, moreover, he describes it as one of the most magnificent in Italy and notes that the Cardinal derived the funds for the expenditures from the inheritance he received from Pietro Borgia upon his death in 1453. Donati also cites the Palace as one of the most famous in Rome at the time.

In a letter sent to his brother, Ludovico il Moro, in 1484, Cardinal Ascanio Sforza describes, with marvel, the furniture and fittings of the Palace. In 1492, Rodrigo Borgio became  Pope Alessandro VI (1492 – 1503) and nominated Cardinal Ascanio Sforza Vice-Chancellor; with this appointment Cardinal Sforza acquired the right to reside in the seat of the Chancellery. Upon Cardinal Sforza’s  death, in 1505, Pope Giulio II conferred the assignment of  Vice-Chancellor and the use of Palazzo della Cancelleria to his nephew Cardinal Galeotto della Rovere who died in 1508. However, prior to his death, he  had the Palace restored and  improved, as following described by Francesco Albertini: “Domus Cancellariae, quam Rodericus Borgia Vicecancellarius reparavit, Galeoctus vero Nepos tuae Sanctitatis vicecancell. multis in locis ampliavit ac statuís marmoreis ac pulcherrimis picturis exornavit”.

Moreover, Giovio describes in detail one of the rooms that Cardinal Galeotto della Rovere had repainted and decorated with various curious emblems of gold stucco; he continues his illustration of the room with the following anecdote: “the painting and decoration of this room, known to be the most admired, still   marvel and often amuse the Camerlengo Guido Ascanio Sforza who dwells in it.”   The improvements and restorations  that Galeotto della Rovere made to the Palace  are remembered in the marble frame of one of the doors on the ground  floor under the eighteen century portico: an engraving on this frame reads GAL VICEANCEL.

In 1508, Sisto Gara della Rovere, another nephew of Giulio II, succeeded Galeotto della Rovere as Vice Chancellor. He died on March 8 1517 and was probably the last cardinal to  perform his role of Vice Chancellor in  Palazzo della Cancelleria. There is no doubt that his successor, Cardinal Giulio de’Medici, who then became Pope Clemente VII, could not establish himself in Palazzo della Cancelleria until the obsequies of Sisto Gara were celebrated. According to Ratti, Palazzo della Cancelleria was never again the seat of the Chancellery which   was directly transferred to Palazzo Riario. In fact, on April 21 1517 the conspiracy against Pope Leone X, to which Cardinal Raffaele Riario participated, was foiled and Palazzo Riario was confiscated.  Thereafter, Palazzo Rario took the name of Cancelleria whereas  the  Palace in Via dei Banchi Vecchi became known as the Cancelleria Vecchia.

On May 23 1541, according to the act done by the notary Agostino Bonvicini, a deed was drawn in Rome pursuant to which Monsignor Ottaviano Sforza donated the Palace to Cardinal Guido Ascanio Sforza, granting him those rights that he had by virtue of the donation he received from Duke Massimiliano.

With the intent of preserving the patrimony of the family and in agreement with all his brothers, in 1555 Cardinal Guido Ascanio established a trust system by which all the family  assets were reciprocally transferred and could be substituted by the respective descendants. Contemporarily, Cardinal Guido Ascanio set the condition that Palazzo Sforza had to be used by the ecclesiastics of the family provided that they could afford and assume the responsibility of its maintenance and restoration. After the death of Cardinal Guido Ascanio in 1564 and in accordance with the afore mentioned covenant, Cardinal Alessandro (d. 1581) and Cardinal Francesco resided in the Palace. The latter dwelled in the Palace from 1583 and during the time he lived there  the side on Via dei Banchi Vecchi  collapsed or was demolished. In light of this incident, the laic members of the family, represented by Duke Alessandro, took forth a suit against the  Cardinal, guilty of having neglected the maintenance of the building, with the objective of reacquiring availability of the Palace. The cause continued until 1680 when a reconciliation, between Monsignor Massimiliano and Duke Ludovico, was reached granting the latter the use of the Palace provided that upon his death it  had to return to its original function. In reality, from that moment the Palace was definitely acquired by the laic members of the family and upon Duke Ludovico’s death in 1685, the building was occupied by Duke Francesco and subsequently by the descendants of Duke Federico with whom the Sforza-Cesarini lineage began.

The following is a description of the Palace written in the early 1600s by an anonymous author and included in a “Description of homes”: