The Historical Roots of the Sforza Family 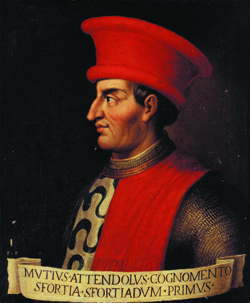 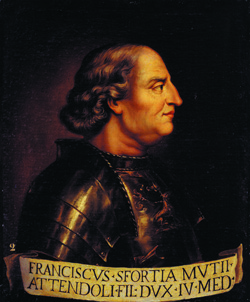 The Sforza Cesarini family, which still resides in the homonymous Roman palace, descends from the Sforza family  which  for many generations, precisely from 1450 to 1535, occupied the Signoria of Milan. The historical roots of the Sforza family, which probably originated in Dacia, are found  in Cotignola (Ravenna) where Muzio Attendolo (1369-1424) was born and whose nickname “Sforza”, subsequently, substituted the original surname of the family.

Tradition ascribes some episodes to Muzio Attendolo which, together with  his military accomplishments, describe the profile of one of many mercenaries and condottieri   that easily found  their  way  in the fragmented reality of Italy, at the time.

The first of these episodes describes Muzio at the age of twelve; he was engaged in plowing his father’s lands when he was attracted by a military company passing by and decided he would join it if the hoe, he was firmly holding,  would remain fixed to the tree trunk he had chosen to strike it at.  And so it happened. Returning to documented historical events, from that day Muzio’s military career was a  continuous success.

His decisive character is relayed to us by another episode  associated to the nickname “Sforza”,  which was probably given to him by Count Alberico da Barbiano who remain  amazed by Muzio’s audacity in claiming the greater part of the war spoils. Subsequently and starting with Francesco, Muzio’s son, the name Sforza substituted that of Attendolo by explicit desire of Queen Giovanna II of Angiò. Finally, the episode describing his death contributes to the myth and legend of the individual and his personality. In fact, Muzio drowned in the Pescara river; while he was endeavoring  to save one of his soldiers in difficulty, he fell from his horse and, due to the weight of the armor he wore, was dragged away by the water making it impossible to retrieve his body .

Until the age of thirty, Muzio Attendolo remained at the service of major condottieri  that travelled through Italy,  thereafter he created his own army and offered his service to almost all the major Italian powers. Finally, he was engaged by Pope Martino V to defend Rome against the recurring raids conducted by   Braccio da Montone; the papal city owes its liberation from these attacks to the military capabilities of Muzio Attendolo. Among the various tributes made to him, it is worth remembering that  the county of Cotignola was  established purposely for him by Pope John XXIII from Pisa and reinstated  to the Counts of Santa Fiora by Pope Sisto V in 1587.  From the beginning, the coat of arms of the Sforza family  depicted the image of an apple quince tree to evoke its origins. [The Italian word for quince is Cotogna, hence Cotignola, the city where Muzio was born.] Later, Robert Duke of Baviera, consented that Muzio add the image of the Palatine Lion.

From Lucia di Torsano he had  seven natural children;  among them, Francesco who became Duke of Milan and Alessandro who became Lord  of Pesaro.  Later, he married Antonia Salimbeni from  whom Bosio, author of the Counts of Santa Fiora, and Carlo, Archbishop of Milan, were born. In the latter part of his life, he had four other children from Caterina Alopa whom he married after the death of Antonia Salimbeni.