The Descendants of the Sforza Family 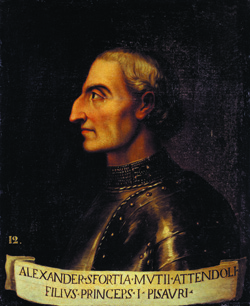 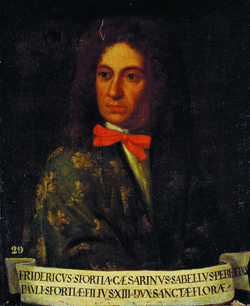 The tenure of the Sforza family’s reign  over the Duchy of Milan, naturally generated numerous noble titles of which the closest descendents of the ruling Dukes benefited from. With Sforza II Sforza (1433-1492), son of Francesco I Duke of Milan, the lineage  of the Counts of Borgonovo was created and lasted until the end of XVII century when  Alessandro III  died without any descendants  from his marriage with Polissena Gonzaga.

The Marquisate of Caravaggio was created by Massimiliano during his reign  of the Duchy of Milan. The lineage  began with Giovanni Paolo Sforza (d.1535), an illegitimate son of Ludovico il Moro and brother  of Massimiliano. Also  Giovanni Paolo, descendant of the homonymous founder of the family, must be remembered for the tribute he received from the royal order of Tosone. The lineage  of the Sforza Marquises of Caravaggio, ended with Francesco Maria (d. 1708) who had no descendants other than his daughter Bianca Maria.

Alessandro Sforza (1409-1473), illegitimate son of Muzio Attendolo, established the branch of the Sforza Lords of Pesaro. Alessandro became Lord of this State in 1455 after his marriage, a year earlier, with Costanza Varano niece of  Galeazzo Malatesta Lord of Pesaro and the subsequent bequest from Francesco Sforza who had jurisdiction over the city of Pesaro. Alessandro had five children, among which Battista Sforza who became the wife of Federico di  Urbino Duke of Montefeltro and whose portrait by Piero della Francesca is presently displayed  in the Uffizi.

Another noteworthy member  of the family was Giovanni (1466- 1510) who married several times. His second marriage  in 1493 was to  the eminent  Lucrezia Borgia, daughter of Pope Alessandro VI, and his  third wife bore him Costanzo II, the last  Sforza of Pesaro who governed the city until 1512.