The Sforza Dukes of Milan 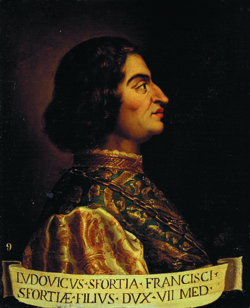 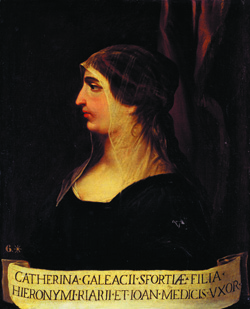 Already in 1425 the Duke of Milan, Filippo Maria Visconti called Francesco to his service but it was not until 1431 that he had the fortune of having him stably at his service promising to donate his daughter,  Bianca Maria,  in marriage, as effectively he did in 1441.

When Filippo Maria Visconti died in 1447, the Milanese formed a municipal government and created the  Ambrosiana  Republic (1447-1450) which, however, was forced to endure external pressures, specially from the Republic of Venice.   Francesco was called to defend the Milanese from Venice and succeeded both militarily against  the arms of the Venetians and politically over their public rulers. After a siege, in 1450 Francesco was able to seize Milan which, subsequently, bestowed him  and his descendants with ducal dignity.

With the advent of Francsesco Sforza, order and prosperity reigned in the principality and, after the peace of Lodi in 1454,  which settled the enmities that the acquisition of the Duchy of Milan had provoked, the politics of the Italian States  were  directed, under the influence of the  Sforza and the Medici of Florence, to the  preservation of peace and equilibrium.

In 1464, Duke Francesco conquered the city and State  of Genoa becoming absolute sovereign of most of what today is Northern Italy; he had the domain of the Duchy of Milan, the Duchy of Parma and Piacenza, of the entire State of Genoa and Corsica. His sound  politics in addressing  the problems of the Duchy of Milan, enabled him to overcome the economic damage that weighed on the population due to the long wars it had suffered. This economic stabilization resulted in the construction of buildings like the Maggiore del Filarete Hospital (1457) and the re-construction of the Sforza Castle which had been demolished almost entirely during the years of the Ambrosiana Republic. Francesco was therefore also a patron of the arts and literature, in his court he received philosophers and literary men, some of whom, like Filego, composed works dedicated to him. Moreover, under his reign the art of printing was introduced and fostered also by his successors in Milan and Lombardy.

From Bianca Maria Visconti Francesco had, among other children, Galeazzo Maria, the future Duke of Milan, Cardinal Guido Ascanio, Ludovico il Moro, and Ippolita who  married  Alfonso II, later King of Naples. Among his natural children, Sforza II, founder of the Counts of Borgonovo, and Polissena, given in marriage  to  Sigismondo Pandolfo Malatesta, Lord of Rimini, should be remembered. In 1466 Galeazzo Maria Sforza (1444-1476) succeeded his father Francesco to the Duchy of Milan, but his reign was interrupted after ten years by an internal conspiracy within his court which dictated its elimination. Among his numerous descendants, the figure of Caterina Sforza (d. 1509) outstands; in 1477 she married Girolamo Riario, nephew of Sisto IV and Lord of Imola, then invested by the Pontiff of the Lordship of Forli. The administration of Girolamo led the population of Forli into revolt and in 1488, Girolamo was killed.

In those tragic moments, the character and personality of Caterina emerged, she  defended the city from the siege for its conquest like a condottiero without surrendering to the enemy and attending external reinforcements. Support arrived from Ludovico il Moro and order was re-established in the city. Subsequently Caterina demonstrated sound governing capabilities, nonetheless, in January 1500 nothing  prevented   Duke Valentino, under the order of Alessandro Borgia VI, from  taking the lands and the city, capturing Caterina and imprisoning her in Rome. Released in 1502, she moved to Florence and married Giovanni de’ Medici. The succession of the Duchy of Milan  was consigned to the young Giovanni Galeazzo Maria Sforza (1468-1493) and this  was, in reality,  the occasion that Ludovico Maria Sforza (1451-1510),  brother of Galeazzo Maria and known  as Il Moro, was   awaiting to implement his plan to appropriate himself of  the Duchy.