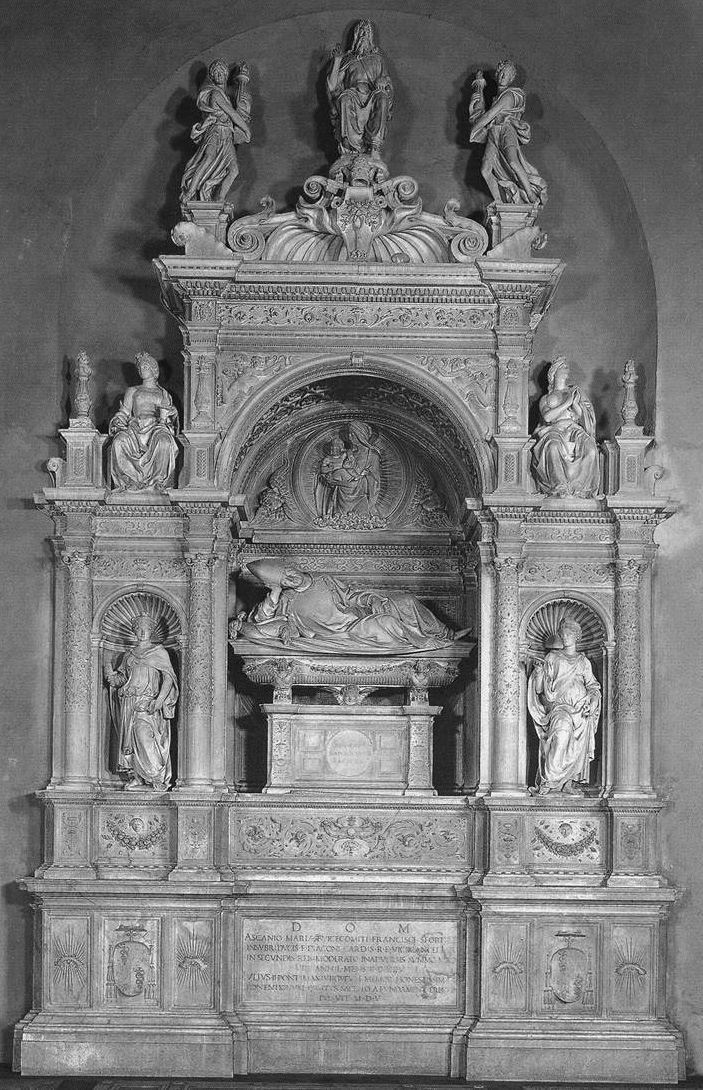 Although it cannot be affirmed that Ascanio Sforza (1455-1505) created the conditions for the Sforza family’s introduction into  the Roman milieu, he was the first , of many clergymen of the family, to assume important  ecclesiastical roles which enabled the family to remain in the eternal city, next to the papal seat. In some cases, the roles assigned to these clergymen, enabled them to acquire important properties such as the present Palazzo Sforza Cesarini, once used as the Apostolic Chancellery.

Ascanio’s career, who was not the first prelate of the family, faced numerous and alternate vicissitudes, often  related to those of the Dukes of Milan. In 1479, when Ludovico became governor of Milan, Ascanio was able to return from his exile in Perugia and in that same year, Pope Sisto IV assigned him the Bishopric of Pavia. On the basis that he favored the Ghibellines, in 1480 Ascanio was again exiled in Ferrara by  Ludovico but after the reconciliation that occurred in 1482, Ascanio remained constantly very close to the person and interests of Ludovico.

From  1484 until  1505, the year in which he died, Ascanio was also entitled with the Bishoprics of Novara, Cremona and Pesaro and, in 1484 he became Cardinal with the title of  Saints Vito and Modesto. Moreover, in 1492 Alessandro VI (Rodrigo Borgia) conferred to him the title of  Vice-Chancellor of the Holy Roman  Church. This appointment was probably the result of the support that Ascanio provided  for Rodrigo’s  election as Pope which occurred that same year.  Thereafter, however, the Pope’s behavior and attitude towards Ascanio and his family were  overtly  hostile. Furthermore, in 1499 Alessandro IV, concurring with the King of France, contributed to the occupation of the Duchy of Milan and the definite  desertion of Ludovico il Moro, Duke of the City, from Italian history. Ascanio was detained,  conducted to France and imprisoned in the Borges tower where he remained until the following conclave of 1503.

He was allowed to participate to this conclave mainly as a result of the  interventions of Cardinal d’Amboise who hoped to ascend to the papal throne with Ascanio’s support. The city and population lived Cardinal Sforza’s entrance into Rome as an event, they expressed their fondness and acclaimed him along the streets he walked on that occasion. In his “Diary”, Burcardo described this promenade  which, from Porta del Popolo, passing through Via di Ripetta and Via Recta (presently Via dei Coronari), and close to the Chiesa di San  Celso, led the  Cardinal  to his seat in the palace of the Apostolic Chancellery. Ascanio detained the title of Vice-Chancellor until his death in 1505 caused by the plague that afflicted Rome that year.

The remains of Cardinal Sforza are preserved in the Chiesa di  Santa Maria del Popolo, as  expressly desired  by Pope Giulio II who requested that an adequate tomb be built for him. The mausoleum, located in the choir of the church behind the major altar,  was accomplished by Andrea Sansovino and is one of the most magnificent in Rome.