In 1744 Duke Giuseppe Sforza Cesarini contracted skilled workers to reconstruct the wing on the Palace facing Via dei Banchi Vecchi which, after the collapse or demolition in the years between 1583 and 1593, had not been recuperated. The extent of the damage was such, that the part of the edifice above the main gate was frequently used as “an uncovered loggia […] seldom decorated with vases of citric fruits”.

The task of designing and directing the construction was assigned  to the architect Pietro Passalacqua who   presented a “model” with an estimated total expense for its realization of 10,000 scudi to be divided among the various workers.   In the course of the contract’s execution, measures were taken to reduce the expense with the result of  neglecting the stability of the construction. This was due to two factors: on one hand the type of contract, which did not address increases of the estimated expense, except for additional work not included in the agreement, and, on the other,   errors in Passalacqua’s original estimate, which had been endorsed by the works involved. In this regard, subsequent appraisals of the edifice evidenced the flaws in the construction not only in terms of the quantity and quality of the materials but also in respect of the dimensions of the structure.

The research that has been conducted in the archives has revealed significant information about   the reconstruction of the wing facing Via dei Banchi Vecchi done in 1744. The manuscript, approximately 700 pages long, represents an extremely interesting and useful document to analyze the facts regarding the edifice’s  construction and, more in general, to understand construction works in Rome in the Eighteenth Century.

A document particularly interesting regards the judicial suit that began in 1749, between Duke Sforza-Cesarini and the head mason, for the damages of the Palace just after the reconstruction. Upon Passalacqua’s death in 1748, responsibilities for the construction fell  on to the head mason. The suit centered on identifying the role of the architect and of all the other workers in order to assign clear accountabilities for  the single damages and errors.  Moreover, it had to analyze in detail the daily duties of the architect and his collaborators  in order to identify  the individual competencies during the entire  course of the reconstruction.

Moreover, the above documents reveal  the original facies of the view on Via dei Banchi Vecchi and the planimetrical distribution, which had been altered, for structural reasons, during the restorations done  in 1781 and 1794 and after  the repairs done in the XVIII century.

For example, the description of the whitewashing makes it possible to discover that the  original color was light blue for the lower part and travertine color for the overhangs. The use of two colors was repeated in the tinting that was done in 1792 substituting the light blue with the color of air which was also applied on the side facing Piazza Sforza Cesarini.  Only in 1866 this side of the Palace was tinted in travertine and brick color. The substitution of the frames also contributed to changing the original facies of the view. The original windows, probably with pectoral sashes,  small glasses and internal panels to darken, were substituted, during the restorations of 1781 and 1794, with the current windows that simplify the various elements and introduce the blinds instead of the internal panels.

The axes of the windows was probably  evidenced by the presence on the second floor of an iron parapet which was subsequently substituted with a walled parapet creating discontinuity with those placed below the other windows.

The construction in front of the courtyard entailed the demolition of the open gallery of which only the rear wall of the portico was maintained and reutilized for  the same function.

The restorations made between 1781 and 1794 resulted primarily in structural changes to the Palace and in a series of decorative improvements aimed to harmonize the different styles.

The restoration that resulted in the demolition of the volts on the first floor, to substitute them with wooden ceilings, and the construction of a wall parallel to the front, was supervised by the architect Giuseppe Subleyras. Instead, the architect Francesco Panini was in charge of the redecoration of the Palace which he personally conducted creating architectonic perspectives using  trompe l’oeil techniques.

The Palace had to sacrifice its garden, the stables and the small Pavone theater when the street Corso Vittorio Emanuele II was built and opened. Moreover, the part of the building that faced the garden was lost to allow the passage of the street. 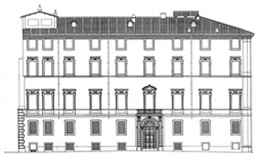 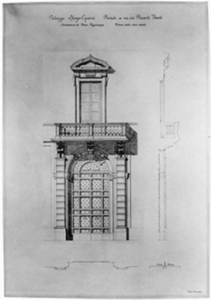